How to Form Healthy Habits

Whenever I think of habits, I think of flossing. It’s generally agreed upon that flossing is good for you, but it’s an action I struggle to turn into a habit. Why is that? Why do most people brush their teeth but few floss?

There’s a lot of research on the science behind habits. This article explores a few of the basics beyond what a habit is, explores ways to build new healthy habits, and shares research on how long it takes to form habits.

What Is A Habit?

What is a habit anyway? David Neal at Duke University defines habits in Habits—A Repeat Performance1:

“habits are automated response dispositions that are cued by aspects of the performance context (i.e., environment, preceding actions). They are learned through a process in which repetition incrementally tunes cognitive processors in procedural memory (i.e., the memory system that supports the minimally conscious control of skilled action).”

40% of the actions we perform in a given day are these automated actions.

If that’s a little too lengthy for you, let’s say habits are automated responses learned through repetition. The route you take to work in the morning, the playlist you put on to study, even how you eat a piece of toast - all of these are habits. One study at Texas A&M University found that around 40% of the actions we perform in a given day are these automated actions2. But that’s perfectly fine! They also found that

“...habitual performance mode was associated not only with lower intensity emotions overall, but these effects were specifically reflected in lesser feelings of stress”

Habits, especially healthy ones, are a crucial part of a good life.

The 4 Stages of Habits

To be able to change habits, it's important to consider the different stages that make up a habit. According to James Clear, an expert on the science of habits, there are four stages that we always go through when performing any habit.

Let's walk through a full example to see how these stages play out in reality. For the habit of checking social media like Instagram: the cue is receiving a notification_, the craving is wanting to see a photo or message from a friend, the response is opening the Instagram app on your phone, and the reward is the feeling of being in touch and connected with your friends.

For bad habits, you might be wondering, "What's the reward?" Even with a habit that is bad for you in the long-term, there is typically a short-term benefit. Eating a full quart of ice cream is awfully delicious, afterall.

To learn more about the science of habits, I'd highly recommend reading the book Atomic Habits by James Clear.

How To Start A Successful Habit

Habits are tough to start and stop. There are entire novels written to assist with habit formation. From years of working on a habit forming product and dabbling in pop psychology, I’ve found a few useful insights to help you form new habits.

A popular New Year’s Resolution is to “eat healthier.” But this is a huge task! Does it mean you need to toss out all the sweets, switch to salads, or even become a vegan? It’s easy to see how these resolutions may not last long.

If you really want to eat healthier, start small, like, really really small. This is what Dr. B.J. Fogg, director of the Stanford Behavior Design Lab, suggests. He has a specific method called Tiny Habits that uses small changes to bring habits into your life. In an interview with NPR Dr. Fogg explains the importance of determining specific actions that will lead to your desired goal: “Take a very small action that you want to do … and then you figure out where does that tiny action fit naturally in your life”

I love his example: ”After I brush I will floss one tooth.” Over time it will naturally grow and you’ll eventually be flossing all of your teeth. Dr. Fogg compares habits to plants - start small and place them in the best spot to grow.

2. Add To An Existing Habit

It can be challenging to remember a new habit every day. Most of the time, we are running on autopilot and don’t really think too much about our actions. Another trick is to associate a new habit with an existing part of your routine. Performing your action after another action will make it easier to remember. This existing habit is often referred to as the “trigger” or “prompt.” It could be as simple as planning to floss after brushing or being prompted by a notification after you check your phone. 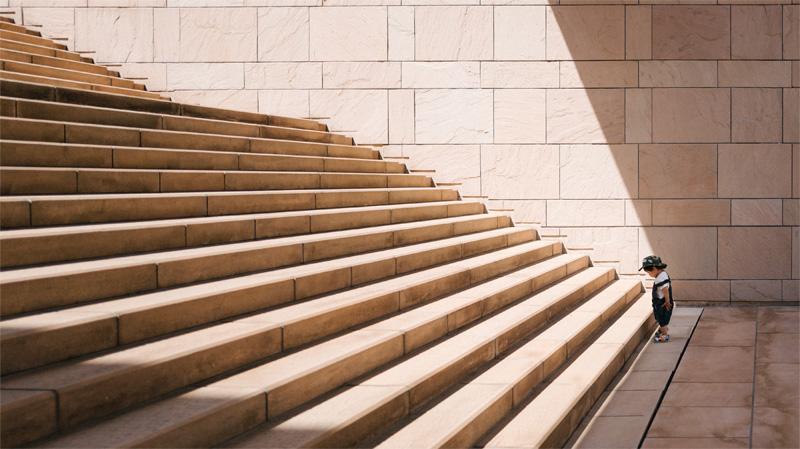 For example, let’s say you want to lose weight. Think about your routine and where you could add a small improvement to move your body or eat better. Perhaps you have an elevator in your office. Each day you take the elevator for your afternoon coffee break. A smart habit would be to start taking the stairs down to get your coffee. Remember, baby steps! Taking the stairs for one half of a trip is easier than committing to “always taking the stairs.”

You might even be mindful enough to skip your usual almond croissant.

Adding a new habit to your routine can be difficult, especially if it involves a lot of effort. Both of the previous tips involve making the habit more manageable - by starting with small behaviors and working it into your routine. A third thing you can do, is to adjust your surroundings to make the habit a little easier. Put fruits out on your kitchen counter, change your route home to go by the gym, or keep a book on your nightstand to make it easier to read before bed.

Another common goal is to go to the gym daily. If you’ve decided to start working out in the morning, a trick for reducing friction is to pack your gym bag before going to bed. It’s one less step in the morning when you know you’ll want to hit snooze instead.

Here’s where willpower comes into the equation. Ultimately you need to find the motivation and focus to perform your habit in the early days. Oftentimes your motivation is sparked by an epiphany - suddenly you want to lose weight. We can’t control when these epiphanies occur, but we can make it easier to put that inspiration to work. 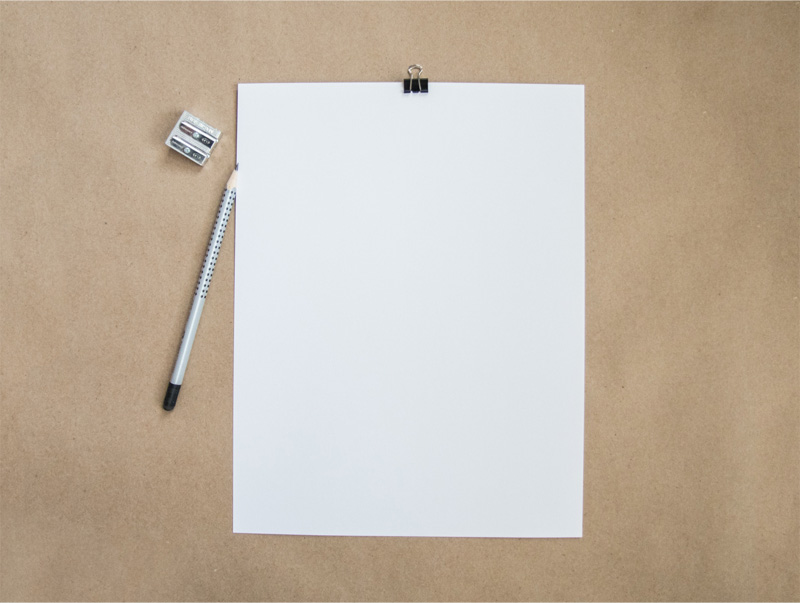 There are plenty of apps out there, but I generally prefer a plain sheet of paper.

Try it out - Habit Grid

One of my personal favorite ways to start new habits is to draw out a habit grid on an 8.5”x11” sheet of paper.

Seeing progress in this manner can be a huge motivator and makes it easier to see overall progress instead of just days in a row.

There’s some interesting research regarding consistency and habits. Though you might have an easier time planning a daily habit, consistency doesn’t have to mean every single day. Researchers at University of California and University of Missouri exploring positive habits (Lyubomirsky, S., & Schkade, D.A. 2005)3 found

people should strive to discover the optimal timing for each activity, that is, a frequency of engagement that allows that activity to remain fresh, meaningful, and positive for a particular person.

For example, one particular study found that performing acts of kindness actually had more impact on happiness if performed once versus multiple times3. This “refractory period” is important to consider and unique to each activity!

Unfortunately, most habits take a long time to start affecting us positively. Started flossing yesterday? Your gums are probably not much better off than the day before. You’ll feel good because you are making progress toward your goal, but you can always augment that feeling by rewarding yourself.

One especially clever way to do this is to build rewards into the activity. Let’s say you love nature and hiking. Maybe you could start trail running as part of a plan to start a running routine. If you’d like to learn to play an instrument, spend time practicing songs in a genre you enjoy!3

Another trick? Literally reward yourself in the same way you’d train a puppy. Want to start a morning meditation practice? Treat yourself with a piece of chocolate after each 10 minute session. You may be surprised by how effective it can be - even if it feels silly at first.

See how our app leverages some of these tips and tricks.

Keeping a gratitude journal has been proven to increase overall feelings of happiness and well-being. Our iPhone app makes it easy!

How Long Does It Take To Form A New Habit?

So how long does it take until a new habit becomes another autopilot action? When does it become something that you automatically do each day or week without much conscious thought. Conventional wisdom is that it takes about a month to form a new habit, but what does the research say?

A study at University College London, London, UK tested how long it took for actions to become automatic for test subjects4. They found: 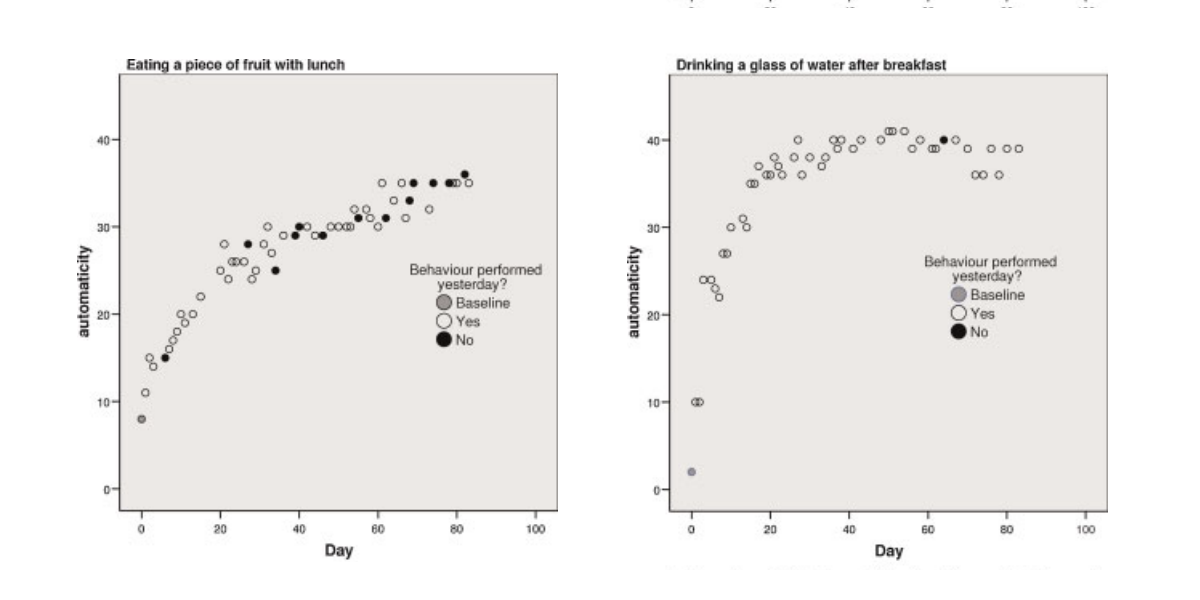 These findings varied considerably for different actions and the researchers hypothesized that consistency played a part in the amount of time for a habit to truly become automatic.

The takeaway? Persist! It could take 66 days to form a new habit and consistency plays an important role in solidifying the behavior.

If you enjoyed this article, please consider sharing it with a friend. You’d be surprised how many people are secretly struggling to form new habits or break old ones. Even if they already know about the science, a little reminder can be a huge help :)

📖 4 Brain Chemicals That Make You Happy

How dopamine, oxytocin, serotonin, and endorphins activate your happiness and ways you can trigger these chemicals

📖 What is a Gratitude Journal?

Learn the benefits of keeping a daily gratitude journal, plus get ideas for prompts and read the underlying science and research